To Cruise or not to Cruise?

Booking her next holiday turns out to be far from plain sailing….

This is the third  episode of ‘Sophie’s Travels’  a story about places where, surprisingly, air quality may not be as good as expected and brings us on journey in pursuit of healthy air while balancing the science with everyday life 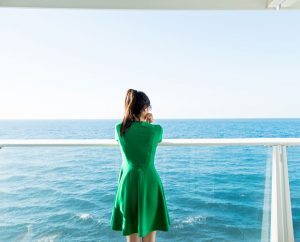 A friend once told Sophie that as soon as she comes home from one holiday, she should start planning the next. Unlike some wise advice, this counsel is a pleasure to follow, so as soon as the kids are fed and occupied, she sits down at her favorite spot by the window to plan the next family holiday. Something completely different to the adventure of India she thinks (see article 1). She feels like letting someone else do the entertaining this time. A holiday to please all the family, where every whim is answered and need fulfilled. Sophie’s imagination is full of fresh sea air as she dreams of a jog around the deck of a lavish cruise ship followed by a nap by the pool. In a moment of serendipity, she looks up from her laptop screen to the sight of a beautiful cruise liner gracefully floating into the city port. Behind her, Sean and Tara noisily squabble over the usual matters of complete inconsequence, but out there on the sea, it is utter serenity.

Eager to avoid visiting larger cities, after all the whole point of this holiday is to experience something completely different to their last trip, she checks out Venice as a destination and cannot believe what she finds. It turns out cruise ships are banned from docking at Venice, or at least at its main canal. Five or six of the world’s biggest liners visit Venice every day and the Venetians got so distressed at the pollution caused by them that they held an unofficial referendum to ban them. When measured, the pollution in the port was found to be 500 times that of the open sea air. Sophie is flabbergasted and as she reads on and more disturbing facts emerge, she discovers that in reality the air she will breath on the jogging lanes and sun deck of her cruise may be as polluted as that she encountered in Delhi.

She swivels in her chair, her laptop on her knees and calls over to her husband interrupting his  reading of the Sports pages. Outraged, she reads to him her new discoveries. In a recent episode of the UK’s Channel 4’s Dispatches, researchers went undercover on a P&O liner, Oceania, to investigate the impact of cruise ships on the environment. They measured the tiny noxious particles (particulate matter) that can penetrate deep into our bodies causing lung and heart problems. The recordings were staggering. On the deck, downwind of, and directly next to the Oceania’s funnels, the particulate matter (PM) levels were more than twice that found in Piccadilly Circus, London!  Another study showed that pollutants were particularly high on the sun decks and jogging lanes. The irony of it. So much for her dreams of fresh sea air.

Environmentalists claim that one cruise ship emits as much particulate matter every day as 1 million cars. These ships also spew out sulphuric oxides and nitrogen oxides. In 8 hours, a cruise vessel discharges 1.2 tons of nitrogen. In 24 hours, the amount is similar to that emitted by 10,000 cars!

How can this be? The answer is in the type of fuel that is most commonly used by cruise ships: ‘heavy fuel oil’. This is the end product, a waste product, after oil is refined to produce the petrol and diesel for our cars and it contains 3,500 times more sulphur than is permitted in road fuel. The shipping industry like it as it is cheap. There are regulations that prohibit the use of this fuel within a certain distance of most ports, however the cheap heavy fuel oil is preferred and it is this that is primarily used at sea. The WHO place the diesel pollutants produced by this fuel in the same carcinogenic category as smoking and asbestos.

Sophie’s gaze returns to the now stationary ship and she wonders if the thousands of passengers alighting into her city know that although they may spend up to 2 days on land, the whole time they are gone, the ships engines will be idling. Cruise ships’ energy needed at berth is high. In fact, a ship needs about as much power as a small town and although the fuel permitted at berth is cleaner than that used at sea, it still produces 100 times as much sulphur as truck diesel.  She thinks of her kids’ school and all the many schools even closer to the port than hers is. Sophie steadfastly refuses to idle her car engine when picking up her kids -and has been known to knock on the windows of those cars who do. It’s horrifying to think that without her knowing, just down the road, noxious gases are continuously spewed into the air nearly every day by gigantic cruise ships.

The impact of short-term exposure to these noxious chemicals is on our respiratory system (wheeze, cough, asthma), our cardiovascular system (increased heart attacks) and our endocrine system and air pollution has been linked to mouth cancer. It is estimated that as many as 50,000 people die prematurely every year in Europe because of pollution from the shipping sector. Putting a nail in the coffin of her cruise holiday plans, Sophie reads that the German lung doctors association recently gave a warning to passengers with preexisting conditions not to go on deck of a cruise vessel. Obviously, this category includes her asthmatic son Sean.

Surely the cruise industry has an obligation to improve? Thankfully, some solutions are emerging.  Scrubbers are the most commonly used method to reduce emissions. These are cleaning systems that can be installed in the ships engine rooms and allow the ships to continue to use heavy fuel oil by spraying the exhaust gases with sea water to remove the harmful sulphur. They are the most economical option (even though they cost many millions to install) but not the most environmentally friendly. Sadly, they really only shift the problem from the air to the sea, as it is sea water that is used to wash and neutralize the exhaust gas.

Recently introduced caps on sulphur emissions mean that now cruise liners must make cutting emissions a priority. In order to comply with this cap, lines will have to use low sulphur fuel oil. The higher cost of this fuel and potential short supply has forced the industry to look at alternatives. Liquid Nitrogen Gas (LNG) emits no dust, soot or particles. This sounds ideal, but of course, in this billion-dollar industry (91 billion actually!), everything reverts to economics. The cost to retrofit ships with new engines suitable for LNG would be astronomical. Nonetheless, some lines have begun to build new ships to combust LNG or at least build hybrid engines in a move towards a future free of heavy fuel oils.

The issue of berthing is also being tackled. Onshore Power Supply (OPS) allows vessels to connect to the local electricity grid for their needs instead of using auxiliary engines to generate power – essentially the ships can ‘plug in’ to each port they visit.  If the local power is sourced from wind turbines or hydropower plants the overall reduction is huge. A cleaner environment isn’t the only benefit of OSP. There is less noise pollution, no vibrations from the ships and the liners can conserve fuel.

Los Angeles became the first port to supply container ships with OPS. Now it has 30 berths, more than anywhere else in the world, equipped to power cruise ships of all sizes. Impressively, onshore power in L.A. has led to a 90% reduction in sulphur emissions, 85% decrease in diesel particulate matter and a 50% reduction in nitrogens. New regulations are being implemented now all over the world and pressure on the cruise industry is mounting. All EU ports must provide onshore power by 2025. Forging the path in Europe, having already implemented OSP, are the ports of Hamburg, Rotterdam and Gothenburg. And now, all new cruise ships must be built with at least the capacity to use OSP.

Just as Sophie is beginning to be convinced the industry is not all bad, that improvements and regulations are leading to a greener horizon, she discovers that cruise lines do not have a good reputation for complying with regulations. A survey of 63 cruise ships found that none of them had significantly reduced their environmental impact in 2017. In one outrageous case in the U.S. courts in 2016, Carnival Corporation were charged with illegally dumping oil and were subsequently fined $40,000,000 for polluting the seas. The case was remarkable from a cover-up point of view. The supervising engineers on board the Caribbean Princess instructed workers to use a “magic pipe” which allowed polluted oily water to bypass the ships filtration system responsible for cleaning the oil. The “magic pipe” rerouted thousands of gallons of dirty water to a tank which was then emptied into the seas off the coast of the UK. A whistleblower, a newly hired engineer, secretly took photos of the pipe and then of its absence when a mandatory inspection took place. He took the pictures to the authorities. The cover up included falsifying records and log books. The investigation showed that the practice had been happening since 2005! (and shockingly was found on 4 other Princess ships).

Of course, not all cruise lines are offenders. A useful reference tool that Sophie finds online is a report card system carried out by the Friends of the Earth. The system ranks cruise ships according to 4 environmental criteria: sewage treatment, air pollution reduction, water quality compliance and transparency. Essentially the report card system helps her choose a greener cruise. A number of cruise lines, including Carnival Cruise Lines, received an impressive A for some of their ships but no line earned an overall A. An uncomfortable number of Fs are scattered throughout the cards. Unsurprisingly, cruise lines have issued statements regarding the unreliability of these report cards.

So, Sophie is left with a dilemma. To cruise or not to cruise? She knows that one decadent cruise with her family is not going to significantly harm any of them. Nowhere is there a record of ‘death from pollution’ or even from asthma attack on board. Although several hundred people do die on board cruise ships every year these are usually recorded as from ‘natural causes’ (and worryingly two murders this year!). What concerns her is the bigger picture. The greater good both for us as vulnerable human beings and for the remarkable planet that sustains us. It’s why she separates her recyclables from her general waste, why she chose a hybrid engine over petrol. Some things are more important than personal pleasure and this may be one of them.

Anna is a mum of three children, one with allergies, and she suffers from allergies and asthma herself. She is a qualified doctor and worked as a General Practitioner and as a dentist for a number of years. She is also an award winning author.

Air on board cruise ships ‘is twice as bad as at Piccadilly Circus’: Click here

How are cruise operators preparing for the IMO sulphur cap?: Click here

Scrubber Technology for Our Ships – How Does it Work?: Click here