This is the introductory episode of ‘Sophie’s quest’;  a story about places where air quality may surprisingly not be as good as expectedand brings us on a search for healthy air while balancing the science with everyday life. 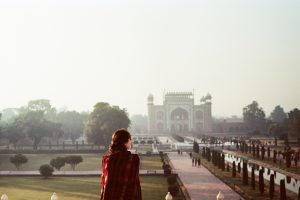 Sophie during her trip in India. Places where air quality may not be as good as expected by Dr. Anna Donovan.

A friend, Sophie, recently returned from an extended trip around India with her husband and two children. She was so spiritually fulfilled she declared that she would never again in her lifetime have to do downward dog or search for inner peace. At the Golden Temple she had experienced a clearing of the mind as she dipped her hands and face in the pool of nectar. In the holy city of Varanasi, where Hindus believe that death can bring salvation, she felt the waters wash away her sins.

Despite this spiritual cleansing, she knew that 3 weeks inhaling the polluted air of India had left her lungs clogged and wheezy. She had spent days at a time in Gwalior and Allahabad, 2 of the cities with the worst air pollution in the world1. Knowing that dirty air kills 7 million of us every year1(WHO), she worried constantly about her 12 year old son, recently diagnosed with asthma, and was acutely aware that he was using his inhaler far more often than at home. Following the example of many of the locals, the whole family wore face masks in an attempt to protect themselves from the poisonous air.

Their visit to the Golden Temple had disappointed her daughter, Tara, who, loving all things glittery, had been looking forward to a seeing a palace of sparkling gold. Despite being replaced in 1999, the temple walls have become dingy and dull due to the chronic air pollution, mostly from the burning of fossil fuels. There is a community kitchen at the temple that feeds a staggering 100,000 people every day and until very recently burned wood rather than cooking with gas or electricity. This, the burning of rubbish on the streets and the burning of crops on nearby farmland, Sophie learned, is what has robbed the 400 year old palace of its sheen.

Her trip has prompted her to wonder about the air quality at home. Sure, the haze in the atmosphere she experienced in India isn’t obvious at home but does that mean that the quality is good? Sophie was the first person I know to buy a hybrid car, she is not averse to chiding me if she sees my recycling bins are not being used to their full potential so it didn’t surprise me when she announced she’s going to do a little research into the air quality in places where she and her family spend their time.

Tomorrow she is bringing her kids swimming after going to the gym, both places where she thought would counteract the effect of the bad air in India, open up their bronchi and allow their rib cages expand. She plans to avoid traveling into the office in the city and will work from home. She had thought that her next holiday would be a cruise where the family could inhale all the goodness of the open sea air. Will her investigations reveal that her perception of the air quality in these seemingly healthy places might not be accurate?

Anna is a mum of three children, one with allergies, and she suffers from allergies and asthma herself. She is a qualified doctor and worked as a General Practitioner and as a dentist for a number of years. She is also an award winning author.