With fascination, when I was a child, I watched my mother do it. I’ve no doubt that, a generation before, she watched her own mother do it. These days, come spring, I cannot deny that I too feel an urge that is bordering on instinctual. I’m talking about spring cleaning here of course…

My mother tackled the spring clean with a gusto that she reserved only for a few important things in life – the quintessential 80’s dinner party for my father’s boss, for instance or the annual summer barbecue for the Jones’s next door. During this mammoth annual cleaning, rugs were lifted and hung out in the burgeoning sun, items were exhumed from deep within closets, dusted off and repatriated to their newly gleaming resting places. Beds and fridges were pulled out from the walls revealing a year’s worth of waste and even an occasional long-lost treasure. Our house was subjected to a kind of colonic irrigation, its guts laid bare on the front lawn for the sun to bleach clean. 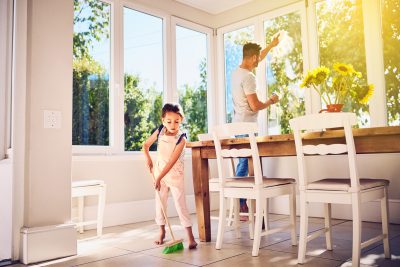 Fast forward a generation and not much has changed. Yes, the term itself is used more broadly nowadays and at any time of the year simply to describe a thorough overhaul of practically anything, but with Marie Kondo’s Netflix series inspiring us to declutter our lives, spring cleaning has become fashionable again.

The days lengthen and the temperatures rise awakening in us a compulsion to start anew, a feeling that necessitates a clean slate for our year ahead. Where does this impulse come from? It is a phenomenon experienced globally by many disparate cultures, seemingly without any discernible connections or associations.

Well, it seems its origins lie in various religious and cultural traditions, spurred on by a biological catalyst and justified by a bona fide science bit.

The Chinese people have a centuries old tradition associated with their New Year which involves sweeping and cleaning to rid their homes of misfortune and prepare for the year ahead. The Chinese take this time as an opportunity to spring clean and it symbolizes a new beginning, a chance to clear away not only physical clutter but also a cleansing of the mind of any regrets and mistakes. The tradition extends to cleaning of the person with new haircuts and bathing the night before New Year. Once the New Year has arrived, no one cleans for 3 days to prevent the sweeping out of good luck.

In Jewish culture, Passover, which falls in Springtime, is one of the most important holidays and it is preceded by a thorough cleaning of the home. During Passover the liberation of the slaves from the Pharaoh in Egypt is remembered, when Moses led the people through the Red Sea after 10 curses eventually convinced the Pharaoh to set them free. The final curse damned all first born to death and God told Moses his people should mark their doors with lamb’s blood so that the curse would ‘Passover’ their homes thereby sparing their children. The Jewish people had to flee so quickly that there was no time for their bread to rise and as a memorial to this, chametz or leavened food is banished from Jewish homes before Passover. Jewish people eat unleavened bread called Matzah during the holiday. A thorough traditional cleaning of the house is performed to ensure that no food or drink made with yeast, even the smallest crumb, remains in a household. Then, by candlelight, there is then a traditional hunt for chametz on the evening before Passover.

The Persian New Year – Now Rouz- occurs on March 21st, the spring equinox, which is the first day in the year when there are more minutes of daylight than there are of darkness. Part of the celebration includes ‘shaking the house’ or khooneh takouni when Iranians meticulously scour their homes performing an intense cleaning lasting a full 2 weeks. No item is left unturned and the tradition is followed by the donning of new clothes signifying a new start. Fresh flowers are brought into the house to celebrate the new season and streets and houses are decorated with symbols of burning and planting to symbolize renewal. I’m particularly struck by the term ‘shaking the house’ as it conjures up clear memories of my own mother shaking out rugs, blankets and throws – many thousands of miles away from her Iranian counterparts.

Catholic and Greek Orthodox religions both have traditional cleaning rituals during springtime, and these may be carried over from the Jewish Passover tradition. According to ancient rituals, the 3 days after Palm Sunday are dedicated to cleaning and the whole family gets involved in the chores aiming to have an immaculate home free of clutter by Wednesday and ready for the most important feast of the Catholic year, Easter. In the church, the altar is cleaned and cleared in preparation. Even Lent, the 40 days of abstinence leading up to Easter, could be seen as a spring clean for the soul. In fact, the first week of Lent in the orthodox faith is called ‘clean week’ and is marked by both a cleansing of the soul and the house.

Biological Origins and the Science bit

Our pineal gland, a tiny endocrine gland buried deep in our brains, is responsible for the production of melatonin and it is this melatonin that causes sleepiness in humans. The pineal gland responds to darkness, increasing its production in winter and reducing its output in summer so we do actually experience an ‘awakening’ with the dawning of the longer days of spring. This boost of energy and shaking off of the stupor of winter spurs us to naturally rise earlier and carry out the jobs that have been neglected during the winter months. Also, with more daylight, the dust and dirt that has gathered in the relative darkness is more visible – especially true in the days when candlelight was the only form of light. In days past, when homes were heated with open coal fires, walls and floors became covered in soot so I’m sure it was a great relief to throw open the doors and windows and scrub the place down. During the winter, it just wasn’t possible to air the house without letting valuable heat out. Warmer weather also allows laundry to dry. Scientifically it really makes sense to clean our homes as the weather is getting warmer – the rising temperatures promote the growth of bacteria, so to prevent infection and disease a good scouring is vital.

Thankfully we have it easier than our forbearers and with the help of our various modern appliances, jobs that could only reasonably be done once a year in warmer weather can now be done at any time and the term ‘spring clean’ is no longer wedded to springtime. I am certainly grateful to live in an era when dust, dirt and grime can be vacuumed, machine-washed and tumble-dried. Though, if you have days like I do when household chores tend to end up on the bottom of the to do list, take a little advice from actress Phyllis Diller – If your house is really a mess and a stranger comes to the door, greet him with, “Who could have done this? We have no enemies.”

Why Do We Traditionally Clean Our Homes At the Beginning of Spring? Click here