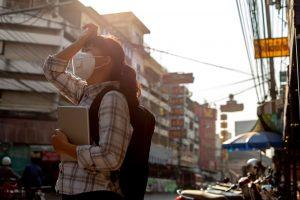 Here in the West we have never been so air aware. Yes, its proving to be a battle that is hard to win, but at least we are trying. Highly advanced systems monitor our air quality and stringent laws ensure that, most of the time, the air we breathe is relatively healthy. When it’s not, we have warning systems in place and processes to follow so that we can get back on track. We are aware and lucky enough to be educated on pollutants and allergens, toxins and poisons so that the indoor air quality in our homes promotes health and wellbeing.

It was the increasingly awful peasouper smogs that prompted the UK to pass their first Clean Air Act in 1956. Four years earlier, ‘the great London smog’ had occurred when an anticyclone settled over the city one December day. The wind dropped, the air grew damp and a smog like no other formed – a sickly thick yellowish brown stew of deadly particulates that enshrouded the city. The noxious, 30-mile-wide air mass reeked like rotten eggs and thickened by the day. For 5 days, London came to a standstill – no flights, trains (except the underground) or boat traffic could operate. Conductors, walking ahead of buses shone torches into the gloom to navigate through streets that were covered in a slippery ooze. Pedestrians, unable to even see their feet as they walked,  returned home with blackened faces and wheezy lungs looking more like coal miners than city dwellers. Even indoors, the air quality was so poor that movie theatres were forced to close as the thick fog blocked the screen. Children were advised to stay home from school in case they got lost in the gloom.

The health effects were catastrophic. Undertakers ran out of coffins as the death rate in the East end of London increased 9 fold. Those with pre-existing lung illness such as asthma, the very old and the very young were most at risk. Smokers, of which there were many in 1950s London, died in their hundreds. After an initial slow response to the crisis, the government launched an investigation and the Clean Air Act was passed in 1956 which restricted the burning of coal in urban areas and authorized local councils to set up smoke-free zones. Homeowners received grants to convert from coal to alternative heating systems.

This episode seems from a different world, a time so long in the past that it reads like it’s from a movie.

But how about this? 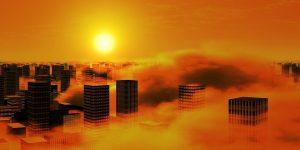 Residents of Delhi in India woke last month to hear that schools were closed, all construction halted and flights diverted due to the low visibility caused by air pollution. Five million masks were distributed to children, students protested at ‘not being able to see in front of them’ and the government advised people to stay indoors. Sound familiar? Nearly seventy years have passed since the UK and the United States passed their first Clean Air Acts and began their battle to ensure we can breathe easy but in the developing world, things have only gotten worse. With huge and very rapid growth of cities as people move from rural to urban areas, air pollution is getting out of control.

Yes, India’s recently released much anticipated National Clean Air Program is designed to prevent, control and reduce unhealthy air pollution but when the Minister for Health and Family Welfare advises residents of Delhi to eat more carrots and the Minister of the Environment says to ‘start you day with music’ to combat the pollution, confidence in them is understandably hard to muster.

Air pollution causes about seven million deaths worldwide every year. This figure includes deaths both from outdoor air pollution and indoor air pollution. The deaths are mainly due to stroke, heart disease, chronic obstructive lung disease, lung cancer and acute respiratory infections. WHO data shows that 9 out of 10 people breathe air containing high levels of pollutants and it is the low and middle income countries that suffer from the highest exposures, both indoors and outdoors. This pollution, whether it be the smog enveloping the cities or the smoke inside homes is truly a major problem for our health and wellbeing and for our climate.

Where is the justice in these scenarios?

In the capital of Mongolia, Ulaanbaatar, a child with asthma goes to school right next door to a boiler used to heat the city’s hydraulic grid. This boiler is heated by raw coal – far worse a source of pollution than cars or trucks- and the smoke is pumped out of a chimney that stands just metres away from the school fence. This same child lives in a traditional ‘ger’ house , which is heated by a central stove and guess what is burned in the stove? Raw coal. Raw coal is cheap and accessible for the family as it can be dug out of the ground in a nearby area. The temperature in Ulaanbaatar  can drop to -40Celcius so it takes an awful lot of fuel to keep the asthmatic child and his family warm. Compare this to my child with asthma – she lives in a house heated by geothermic system, so no fuel is needed It is a sustainable and environmentally friendly system. She lives in a suburban area outside a European city where air is closely monitored and strictly enforced environmental laws ensure that air remains safe to breathe indoors and outdoors. It’s probably no exaggeration to say that she that at no point in her life has she been exposed to smoke producing coal.

At the recent One Young World conference in London the CEO of Siemens admitted that no one ever talks about the responsibility that comes with capitalism. He asked the very pertinent question.. ‘How do we make the 4thIndustrial Revolution one that is inclusive and ethical?’ At the same conference, Dr. Isaac Olufadewa noted that ‘Africa has resources that has benefitted the entire world but hasn’t reaped the benefits of these developments.’

The EPA defines environmental justice (EJ) as ‘the fair treatment and meaningful involvement of all people regardless of race, color, national origin, or income with respect to the development, implementation, and enforcement of environmental laws, regulations, and policies.’

And yes, there are initiatives up and running as we speak. One of these initiatives was launched by Hilary Clinton and is called the Global Alliance for Clean Cookstoves. 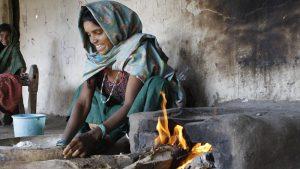 Worldwide, almost 3 billion people use biomass (wood, charcoal, crop residues, and animal dung) and coal as their main source of energy for cooking and heating. Burning of biomass and coal emits a mixture of pollutants that have been associated with acute respiratory infections, chronic obstructive pulmonary disease, lung cancer, asthma, nasopharyngeal and laryngeal cancers and eye disease. In most developing countries, the most common way of burning these fuels is in open or poorly ventilated stoves and women and their vulnerable small children spend many hours a day close to these stoves. It was with this in mind that Hilary Clinton launched her public-private partnership to provide clean and efficient stoves and fuel to millions of families.

The scheme has had mixed results. Certainly, as a social justice initiative, the idea is admirable. The stoves are easily and cheaply manufactured and are more efficient so not only are emissions reduced but women are less tethered to cooking, freeing up time for them to spend with their children, working, etc. The sometimes dangerous task of collecting fuel in forests is made defunct. Forests are protected from being destroyed for fuel. Small local businesses could benefit from selling the stoves and fuel.

Many millions of these stoves have been successfully distributed  around the world, but despite this, the anticipated benefits aren’t being completely fulfilled. One basic problem is that unless the stoves are operated by electricity or liquid fuels (and the ones that do are more expensive and this fuel is hard to come by in remote villages), emissions are still very high. Technical problems are an issue – cracking under constant heat and not getting food hot enough, for instance. Cooking over an open fire is a tradition deeply embedded in some cultures and is proving very difficult to change and given that the open fire gives the food a better barbecued taste, it is proving a difficult job to convince women to change. To be fair, the Global Alliance, which includes international corporations such as Shell, are now nearly a decade up and running and are learning from past mistakes and continuing to push behaviour change interventions that have impacted more than 40 million people.

Pharma companies don’t necessarily have the greatest reputation for social justice but Astra Zeneca is one such giant to launch a helpful initiative. ‘Healthy Lung Programme’ was first launched in 9 Asian countries and has since expanded into the Gulf region and more recently to Mexico. The aim of the programme is to enhance the management and increase public awareness of asthma and chronic obstructive pulmonary disease (COPD) and to reduce the number of cases and related deaths. Respiratory diseases are a significant public health concern in Mexico, with asthma and COPD ranked as the fourth leading cause of death according to official estimates and the programme hopes to change this.

The CEO of BP has been heard to say that the ‘haves must not forget the have-nots’ and the company claim to be giving back in a number of ways. Recognising that communities must be the impetus for implementing local solutions, one social initiative that is running in Senegal -‘Invest In Africa’- aims to train local companies to understand international standards and contracting processes so that local businesses can bid for contracts.

Corporate social responsibility is becoming trendy and that can only be a good thing. Large corporations have come to realise that the health of their employees directly effects their bottom line and that their reputation worldwide really matters. Our social responsibility is clear. The ‘Conscious Capitalism’ movement has an impressive credo – “We believe that business is good because it creates value, it is ethical because it is based on voluntary exchange, it is noble because it can elevate our existence and it is heroic because it lifts people out of poverty and creates prosperity. Free enterprise capitalism is the most powerful system for social cooperation and human progress ever conceived. It is one of the most compelling ideas we humans have ever had. But we can aspire to even more.”

Yes, we can aspire to even more.

Clean Cooking Alliance : What do standards Mean To You  Click here