A brief history of laundry

A brief history of laundry 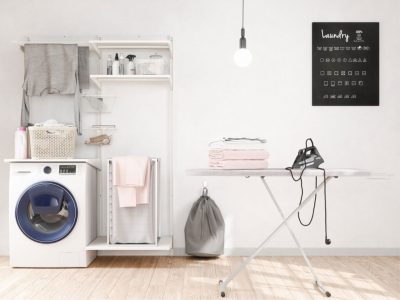 I spend an inordinate amount of time in my laundry room. When my youngest was just three years old, she casually referred to it as my ‘playroom’. Her playroom was where she and her siblings spent their time, my playroom was where I spent my time. Simple as that to a three year old year old. It did make me stop and think though. My laundry room is a tight space, laundry is not among my favourite pastimes, and it’s pretty time consuming to keep a household of 5 in clean clothes and bed linen. But, relatively speaking? As compared to laundry duties of the past? It’s a breeze.

The first washing machine wasn’t invented until the late 1700s, so until then human hands and feet did most of the work. I find the Romans impressive in this regard for two reasons – the first was that it was considered a man’s job. The second was that the job was done by professionals. No laundry for the ordinary Roman resident. Fullones or clothes washers were in charge of the washing and drying for the citizens of ancient Rome. Their specialised laundrettes had vats or tubs to wash the mainly woollen clothes and the Fullones used their feet to stamp out the dirt. Rather disgustingly, urine was collected from public restrooms and this, because it contained ammonia, was used as a cleaning agent. Soap wouldn’t become widely available until many hundreds of years later. Then after drying in the open air, they raised the nap of the wool using a thistly plant or the skin of a hedgehog. Impressively inventive! Sulphur or a white earth did the trick to whiten the cloth. I don’t envy the rotten egg smell of sulphur that they must have had to endure.

Medieval Europe and beyond

Rivers were hugely important to any kind of settlement in medieval Europe and one of their functions was laundry. Laundry was such an undertaking that it was not a regular or frequent occurrence and it was mainly done by the people themselves- no laundry service here, unless of course you were rich.  People smelled, clothes smelled and the poorer one was, the worse the situation. Bats and boards were used to beat out the dirt, usually without soap, or the items were pulled over and back over rocks. Soap only became widely used from the 1700s onwards. Can you imagine the back breaking work involved at a rivers edge even in the dead of winter, hauling and dragging the water sodden clothes and bed linen. No wonder it wasn’t a weekly task.

Fast forward a couple of hundred years and as cities grew and access to rivers decreased, large washtubs made of wood became the norm in most households. Clothes were stirred and beaten in a process that could take days and was often carried out by poor washerwomen. During the 1800s the washboard became a common household item and became more effective with the addition of fluted metal sheets. Soap became more commonplace and as the importance of personal hygiene became apparent, so the frequency of washing increased. The Victorian era was characterised by the Monday wash- these items then spent the week in transit being washed, pressed and aired and ready for Sunday. 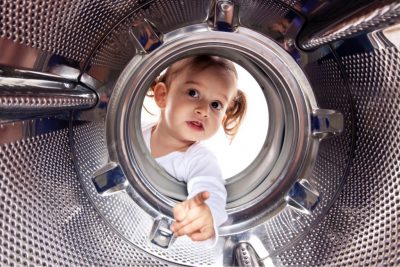 What a relief it must have been when the first machines appeared on the scene. Obviously laundry still required a lot of manpower as this was long before electricity, but these basic machines -wooden cages with handles for turning- must have hugely eased the workload for the common person. Throughout the 1800s, models improved and evolved with the first revolving drum appearing in 1851.

The first electric machines appeared around 1900 and this dramatically improved things. No longer did the drum need manual rotation, a motor could do the job. Nothing comes without its faults though and the initial motors, which weren’t adequately protected from dripping water, often short circuited and caused shocks …maybe the side of a river was preferable after all…

By the 1920s, the old wooden or copper tubs were being replaced by white enamelled sheet metal and some even had built-in water heaters, but really it wasn’t until the 1940s that washing machines became recognisable as we know them today and not until the 1950s that timers and spin drying features became standard. In 1957, the most advanced washing machine ever was produced- offering 5 push buttons to control wash temperature, rinse temperature, agitation, speed and spin. Very fancy indeed.

And now, 60 years later, we have advanced beyond the wildest imaginations of our ancestors. Those poor unfortunates at the side of a freezing river would never believe how easy we have it. They would have been lucky to remove a fraction of the dirt and debris in their filthy clothes despite the exhausting amount of work involved. Garments would have been handed down from generation to generation, unwashed and full of germs and allergens of every conceivable type.

Today, by using advanced technology, the most modern machines can confidently remove allergens such as dust mite and pet dander ensuring a healthy home by preventing the accumulation of these nasty allergens. And this can even be done now without even the trouble of using the washing machine: steam can be used to gently refresh items between washes by innovative sanitary cycles that can reduce wrinkles and remove odours and allergens. Even the kids’ plush toys can be sanitised in this way. All this can be wi-fi enabled, so can be done by our smartphone from where ever we may be – relaxing and enjoying ourselves on a beach maybe. Or, if you prefer, you can tell your washing machine to start a cycle by using voice command. It’s a far cry from urine and sulphur, that’s for sure. My poor ancestors might even say that I have my own personal playroom…

How People Used to Wash: The Fascinating History of Laundry, Scrubba, Click here

Why and how we certify washing machines – a Q&A