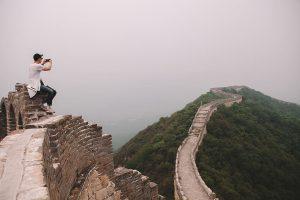 It would look like an apocalypse, I think, to the builders of the Great Wall of China, if they had downed tools on a sunny day 500 hundred years ago and took a moment to admire the view towards Beijing. If instead of being treated to the usual wonderful inspiring vista, extending into the distance towards the growing city just 60k away, they were faced with a hazy cloud obscuring everything before them. An apocalypse, or certainly some kind of natural disaster on an epic scale.

Today, that view is perceived as perfectly normal. Just a regular occurrence that has to be tolerated. Not the end of the world at all. At least not yet. We have to do a bit more damage before that day comes.

Beijing’s air quality hovers around the ‘unhealthy’ category for much of the year. The perfect storm of millions of cars, noxious fumes from factories and coal powered industry combines with the city’s geography : Beijing is built on a flat landscape and surrounded by mountains so if there is no wind to blow away the smog, it hangs over the city like a shroud. Winter and summer are the worst. The coal consumption soars in the winter to heat the city and then once again to run air conditioners in the summer. And then there are the better days – ask a Beijing resident what they like about public holidays and they will invariably tell you that it is the blue sky ; factories are shut down and traffic is light meaning that air quality tends to improve. This year, the COVID19 pandemic illustrated this phenomenon particularly well.

In January, the outbreak of the lethal COVID19 resulted in delayed reopening of businesses and factories across China after the Lunar New Year holiday so emissions from factories and traffic dipped dramatically below normal. Government travel restrictions and requirements for workers to have protective masks and undergo temperature checks slowed down the usual return to work. So much so that the volume of traffic dropped by 77% and emissions dropped by 20-30%. NASA and the European Space Agency pollution monitoring satellites released two images which show a significant change in nitrogen dioxide levels in the air over the country between the start of the year and the end of February. The first image reveals large swathes of pollution over the big cities, including the capital, Beijing. The second image shows that most of that pollution has disappeared.

Now however, China is getting back to work. Restrictions and lockdowns are being lifted, businesses are returning to normal. It hasn’t taken long for pollution to rise again and, inevitably, today Beijing has an air quality index of ‘unhealthy’.

Dust masks are not a new addition to life in China. Before coronavirus, the smog had already brought a new way of living to residents of Beijing. Just as I routinely check the weather forecast to know if I should grab an umbrella before leaving the house, so the residents of Beijing check the AQI (Air Quality Index) to know whether to don a dust mask. The AQI value tells how contaminated the air is at any given time, by measuring particulate matter, sulphur dioxide, carbon monoxide, nitrogen dioxide and ozone quality. The daily AQI is broadcast on the news along with the weather forecast and there are numerous apps at hand for convenience.

I’ve just checked the World Air Quality Index Project website and the forecast for the air quality in Beijing for today tells me that the air falls into the category ‘very unhealthy’. This means that I should avoid outdoor exertion. No run for me then. For my daughter, who has asthma, a ‘ very unhealthy’ designation, (and I’m quoting here from the U.S. Environmental Protection Agency website) means that ‘it is expected that there will be widespread effects among the general population and more serious effects in members of sensitive groups’. 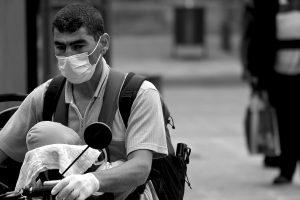 Humans being humans though, we can adapt to protect ourselves and sure enough, adaptions have been made to make life liveable in Beijing. It’s not just the masks – which now are manufactured in all sorts of funky designs and trendy shapes – air purifiers in homes are becoming commonplace and in some schools, giant oxygenated domes or pods have replaced traditional gymnasiums so that school activities can continue even when the AQI is bad. This is the stuff of science fiction.

In a clever and chilling reversal of the pod role, a British artist, Michael Pinsky, has created an art installation consisting of walk-in domes, each reproducing the odour of the toxic air of a specific city. His aim is to wake up western society to the horrific state of the air in developing world cities by allowing us experience the smell, taste and feel of the noxious environment as we pass from dome to dome. His Beijing dome smells like sulphur and coal.

To be fair, Beijing has cleaned up its act to a certain extent. In 2012, more than one million people reportedly died from air pollution in China and it was the following year that the air was so bad in Beijing that the term ‘airpocalypse’ was coined. The PM2.5 levels – that’s the really dangerous pollution that can lodge deep in our lungs – was at record breaking levels and the government made significant changes including measures to control coalfired boilers, provide cleaner domestic fuels and the introduction of restrictions on vehicles in the city. 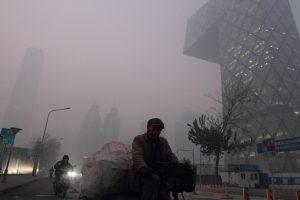 These figures are laudable and prove that where there is a will there is a way, but all levels of all pollutants in Beijing still far exceed those recommended by the WHO and the IAQ typically falls in the ‘unhealthy for sensitive groups’ category (those with pre-existing lung disease like asthma, for example) for a lot of the year. Chinese officials have been patting each other on the back but they have a long way to go. To be clear, the 2018 average PM2.5 was 51 micrograms per cubic meter but the WHO recommends an air quality standard for PM2.5 of no more than 10 micrograms per cubic meter. There is work to be done.

Beijing is one of the most rapidly developing cities on the planet. Its population exceeds 21 million souls – every single one of whom deserves to breathe clean air, both inside their homes and out. Those with asthma and other respiratory conditions are most vulnerable and air purifiers in homes, workplaces, schools and cars are becoming absolute essentials for everyday life to protect against serious health consequences.

So if the Ming dynasty builders of the Great Wall had thought that the gigantic smog cloud was an apocalypse, they would have been totally right. An apocalypse by definition is ‘a very serious event resulting in destruction and change’. In this case,  the destruction is of us.

The Irish Times : Smog casts a shadow over our family life in Beijing Click here

Why and how we certify air cleaners – a Q&A