There are moments in life when I am struck by how lucky I am to be born into this particular era. Yes, we have issues now that people of bygone years didn’t have to concern themselves with -environmental worries, the stresses and anxieties of modern living etc – but imagine if you existed in ancient Greece or in Medieval times, or indeed even at the start of the 20th century. Unless you were in the tiny percentage of the elite, life was gruelling. Now, imagine you have a chronic illness. Life would most likely have been short, painful and frightening. And that is without the so called ‘treatments’ and ‘cures’ that had to be endured.

Asthma was one such disease. Over the millennia, the treatment options have included drinking the blood of wild horses, eating 21 millipedes soaked in honey, inhalation of the fumes of hydrocyanic acids ( yes cyanide! ) and inflation of the lungs with a bellows. There was even a period in the 1500s when smoking tobacco was advocated to induce coughing and expectorate mucous. It did that alright. Pouring a gallon of cold water on the back of the neck two to three times a day from a height of two feet was termed a ‘neural adjustment’, suitable for the treatment of asthma. Sounds more suitable as a method of torture if you ask me.

I think of the instantaneous relief that floods me when I use my inhaler and can’t help but wonder how I would have coped with some of these torturous treatments. Not well, I imagine.

Having said that, some of what was known about asthma thousands of years ago is quite remarkable.

Up Until the 20thCentury

Though there are references to breathlessness in ancient China, the word asthma was first used by Hippocrates 2600 years ago. The Greek meaning of the word is to pant and Hippocrates used it more to describe a symptom rather than a disease entity. He was the first to associate the disease with environmental triggers and recognised the link between emotions and asthma. To prevent an asthma attack he recommended that “the asthmatic should guard himself against his own anger”. He also noticed that asthma was associated with particular jobs and professions, such as metal work. Today of course we know of many types of occupational asthma – spray paints used in industrial processes, flour in bakeries ( first described by Ramazinni, the father of occupational medicine in the 1700s) and the emergency workers at the World Trade centre who were exposed to dust and developed a irritant-induced occupational asthma. Another Greek physician called Aretaeus of Cappadocia also studied asthma and set out a definition that was similar to the modern understanding of how the disease develops. Quite incredible, I think.

In approximately 50AD in Rome, Pliny the Elder linked pollen to asthma. He prescribed the use of ephedra in red wine as a treatment. Ephedra is related to the modern epinephrine which is a bronchodilator so this had some truth in it. It also happens to be one of the treatments I could definitely tolerate! One can’t help but think he was only guessing though, as this was the same guy who recommended the blood of horses and all those millipedes.

The association of asthma with emotions was a predominant view throughout the ages. (and today we know that emotional anxiety and stress are triggers). It was often referred to as asthma nervosa. A man called Henry Hyde Salter (1823-71), who suffered from severe asthma himself, defined the condition as “Paroxysmal dyspnoea of a peculiar character with intervals of healthy respiration between attacks”. Basically, he recognised that asthma consisted of violent attacks of shortness of breath. He made drawings of the airways and lungs  and also of the cellular appearance of asthmatic sputum that turned out to be surprisingly accurate. He had a clear understanding that asthma had extrinsic factors -triggers- and intrinsic factors (innate problems in the airways). Black coffee was one of his treatments – coffee contains theobromine, a derivative of theophylline and theophylline itself – a medicine still used today to relax the airway muscles.

Charles Blackley, in England in 1873, used himself as a guinea pig to demonstrate that hay fever and asthma were related. He made traps to collect pollen and applied it to his skin, eyes, nose and airways to reproduce the symptoms.

In 1892, Sir William Osler, one of the co-founders of the John Hopkins Medical School, developed a definition of asthma, stressing the importance of bronchial spasms. He felt strongly that asthma was psychogenic in nature. In his own words – it had a “strong neurotic element” and this probably led to over-treatment with antianxiety medications during this period.

By the 1930s, the role of the immune system in the development of asthma was beginning to be understood. Skin tests for allergies could be performed so that particular environmental triggers could be identified. The discovery of eosinophils – a white blood cell  seen in high numbers in allergic reactions-in the blood and sputum of asthmatics was known to be characteristic of the disease. Two Americans, Francis Rackemann and Isaac Chandler Walker were responsible for developing and advancing the skin testing and the theory of extrinsic and intrinsic causes of the disease. In 1967, Reindert Voorhorst discovered that dust mites are the major source of allergen in house dust and suggested a link between dust mites and allergic lung disease.

In the years after World War Two, lung function tests and the production of the peak flow metre were absolutely instrumental in diagnosis and treatment of asthma, helping to identify seriously sick patients.

Throughout this time, treatment was still limited. Ephedrine was effective, and removal of allergens and adrenaline injections were offered. Asthma cigarettes -if ever there was an oxymoron – were made from the leaves of D. stramonium and the atropine in the plant did help. The first use of ephedrine as an aerosol was 1910 but It would be the 1940s before aerosol inhalation therapy was marketed for asthma. The first “relievers” (Beta agonists), as they are commonly called today, had a lot of side effects but as the decades passed these were modified and the modern beta 2 agonists evolved and became the mainstay of treatment. Over reliance on these medicines though meant that the inflammation of the airways was going unchecked. Only the bronchospasm was being treated. In the 1980s, researchers began to address this issue, when the inclusion of corticosteroids in treatment became the norm. Initially, the oral administration of steroids caused severe side effects that restricted long term use but the development of inhaled steroids with lesser side effects was revolutionary as these reduced the severity of disease, reduced inflammation and reduced the need for relievers. 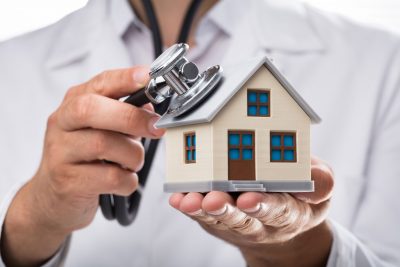 Today, we know that asthma is a chronic disease of the airways with links to the immune system. Inflammation occurs in the airways, causing blockage and breathing difficulties. More than 26 million people in the United States have asthma, and roughly 6 million of these are children. The World Health Organization (WHO) estimates that this number has increased over 60 percent since the 1980s and that the death rate from asthma has doubled in the same time. The reasons for this are not entirely clear but certainly our move indoors has contributed. Asthma in children did not start to increase until 1960, but by 1990 it had clearly increased to epidemic numbers in all countries where children had adopted an indoor lifestyle. Our warmer, tighter homes have created an environment that dust mites love. Our lack of circulation of fresh air from outdoors allows the build up of allergens. Volatile organic compounds off gassing from our furniture, insulation, paints and a host of other products in our modern homes can trigger asthma. Fungal spores, mould and particulate matter for cooking add to the problem. We spend 90% of our lives indoors where the air quality can be 2-5 times worse than outdoors. It’s time we addressed this fundamental issue of poor indoor air quality and ensure we are living in healthy homes.

In spite of all the progress achieved over the past two centuries, the basic causes of asthma are still not fully understood. The immunobiology of asthma is still unfolding, with mystery enshrouding the exact nature of the inflammatory process and as long as this remains, a cure is unlikely. This all sounds somewhat discouraging but miraculous gene therapy cures probably aren’t too unlikely in the future. The knowledge we’ve gained regarding asthma triggers is invaluable as, if we pay more attention to our immediate environment, we can make our homes healthier. One thing is for sure, I, for one, am very grateful for every step away from the tortuous treatments and cures of the past.